Merajobb engaged me to lead the redesign their job site

Merajobb engaged me to lead the redesign their job site

I was asked to join the team at Merajobb, the collective job site for three of Sweden’s largest newspapers, to completely redesign their site. My role was to lead, analyze user needs, create a site concept and make sure no greatness was lost in the process. The team, consisting of the developers at HR north, designer Jonas Björkman from The Art of job and I completed the project in record speed. 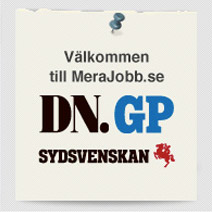 DN, GP and Sydsvenskan has joined forces and gathered all their recruitment ads on one single site Merajobb.se, creating one of Sweden’s largest job sites. By mixing traditional media and a modern job site they strive to invite job seekers and possible employers to an open and efficient dialog. Its main purpose is connecting job seekers and the companies in need of their expertise. Since 2005 Merajobb.se has been striving to become the best platform for job seekers.

They decided that 2011 would be the year when they reinvent themselves and start the process of becoming an even better platform for job seekers and employers, which furthermore would attract a bigger crowd and more advertisers. In mid October 2010 the first step was taken in the direction of achieving this goal, by involving myself and the team from HR north. The challenge was to during an insanely short period of time make not only a “face-lift”, but to change the entire design as well as the technical platform.

The job seekers: Which job has my name written on it?, How do I get this job?, How do I not miss jobs like this in the future? and most importantly, How do I present myself so that the jobs come to me?

The first task was to determine what the site should contain. In order to narrow it down and be more specific, we created a mind map pointing out the direct relation between the needs of the target groups and the business goals. This is very handy and makes it easier to continue the process without losing any important factors on the way.

During workshops with the client we realized some fundamental facts for creating a great job site:

This was an important discovery for us since it meant identifying that there is actually a resistance against what job sites are all about even though there are a lot of job seekers out there. The users dislike the process yet want the profit in terms of a job. Once we realized this, we knew what the new kind of job site should provide for its users. The site itself should not be an obstacle or an exhausting task, it should be all about finding the job they want. Less clicking, more job opportunities. 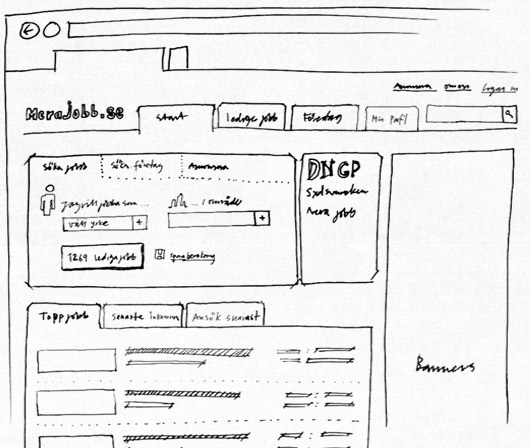 The site concept created was focused around providing the opportunity to tell the site who you are and where you want to work. The site then gives you immediate response on how many jobs are for you. Right beside the job-box the sender newspaper logos are presented to provide credibility. Directly underneath the search box the top jobs, the newest incoming jobs and the jobs that have to be applied to immediately are presented.

My way of working is based on the importance of defining the technical solution, the user interaction and the graphical concept simultaneously. This is done by gathering the major stakeholders in conceptual workshops, in this case the developers and the client, and follow the user’s way through the system sketching screen by screen with pen and paper. Problems can therefore be solved immediately as we go.

By giving the user multiple choices in their search process they can provide an ideal search result than normally in a regular text field. 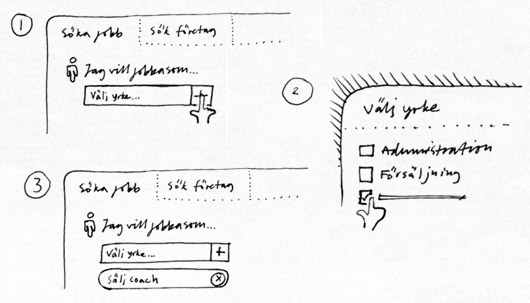 Enabling multi select of professions and areas were they user would like to work, the user is immediately presented with a number of suitable jobs without even having to press the search button.

According to our conclusions the search fields should provide options rather than being based on free text. This means instead of them having to search for the right jobs, the site provides this for them. This prevents spelling errors and the intention is that multiple choice will provide a better search result.

When the concept was approved by the client the detail design and the technical development phase was initiated in parallel processes based on the sketches. The talented, extremely efficient and precise designer, Jonas Björkman from The art of job provided the art work. The timeless design managed to tell the story of the newspapers and at the same time included all the the trappings of top modern interactive products and apps. The code equilibrist developers At HR-North managed to create a site with an astonishing speed and immediate response delivering the intent of the concept forward to the user in the best possible fashion! 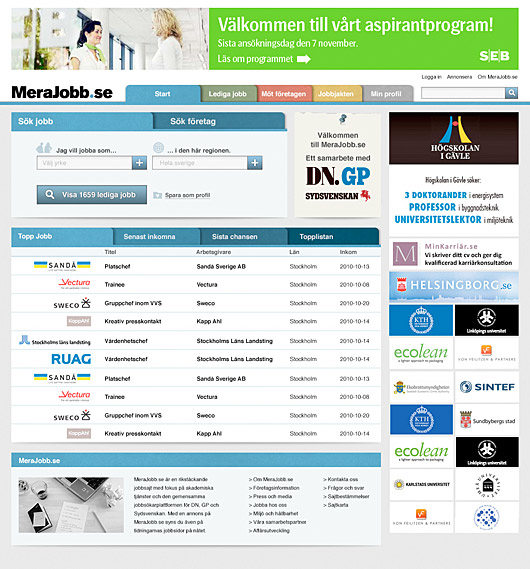 The Concept was converted in to full color design by Jonas Björkman.

Hi, I'm an Interaction designer based in Stockholm but offer my services all over the world.